Join us on a fantastic journey from the Venice Lagoon to the depths of the ocean, through 35 themed displays.
Be amazed as you journey through the tunnel in our ocean tank containing 500,000 litres of water. Encounter majestic sharks, beautiful rays, a grouper and other stunning tropical fish.
Continue your journey to the most spectacular bay where the rays seem to fly with unique grace.

The Venice lagoon is situated in a unique environment. Located to the north of the Adriatic sea, it embraces the enchanting Venice and is home to native species that are unique in the world.
Due to its geography, the water and salinity levels vary greatly and as such only a few animal species are able to survive in this type of environment!
Given its characteristics, in 1987 Venice and its lagoon were included in the UNESCO World Heritage Site list!

There are nearly 50 species of seahorses, from the smallest at less than 2cm to the largest, the Pot Bellied Seahorse, which is more than 30cm long.
Seahorse pregnancy is amazing thing. Believe it or not, the male seahorses get pregnant, not the females. The female uses an ovipositor to expel her eggs into the male’s stomach pouch.
SEA LIFE Jesolo has sterded in 2016 a Sea Horses Breeding project. 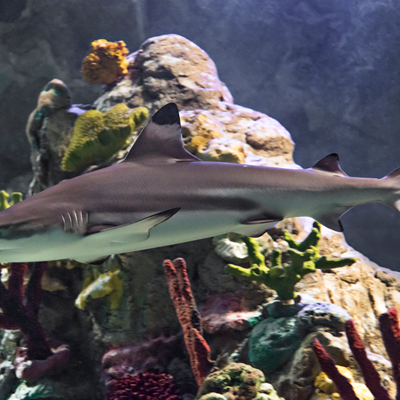 Blacktip Reef Sharks are found in warm coastal waters around the world! Black Tips are among the most popular sharks inhabiting the tropical coral reefs of the Indian and Pacific Oceans, because Black Tip Reef Sharks prefer shallow, inshore waters. They are typical in appearance of how humans imagine a shark to look, and can be seen at our big ocean tank!
The blacktip reef shark is one of the few species that can leap completely out of the water. This phenomenon, which seems to have an explanation in the shark’s attempt to get rid of any parasites on their body, is called “breaching.”
Sharks are the most misunderstood creatures in the Ocean. Far from being predators, they face extinction from being preyed upon by humans. Each year over 70 million sharks die needlessly due to Shark Finning. When Cownose Rays swim in the ocean, their wingtips often break the surface, resembling the dorsal fin of a shark, which sometimes causes undue alarm for swimmers and divers.
You'll finish your journey through the depths of the ocean in the bay of Rays. Here you will find an assortment of amazing creatures!
Come and see this incredible creature getting fed by our expert biologist

Dive into the magic underwater world of SEA LIFE

The fish of the Venice Lagoon