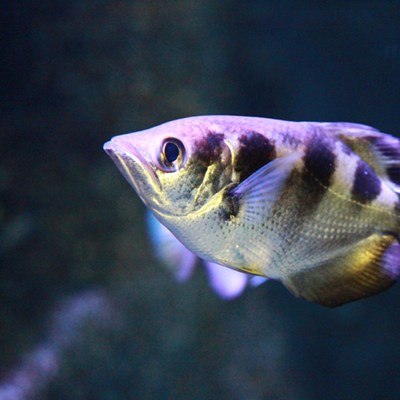 The banded archerfish increasingly lives in coastal brackish water areas from the Red Sea via India and China in the shallow waters of the mangrove forests. As the brackish waters are very shallow there, they are subject to strong temperature fluctuations (23 to 28 ° C) and fluctuations in salinity during the tides. This requires the archerfish to be particularly adaptable. External sex differences and subspecies do not occur in archerfish.

The banded archerfish feeds mainly on flies, ants, grasshoppers and other insects that have fallen into the water. In order to increase his number of prey, he has developed a technique of hunting that is very effective. The archerfish shoots its prey with a targeted jet of water from the leaves or stalks of surrounding plants.

Some specimens meet only a few centimeters large prey at four meters.

The archerfish can also adapt the strength of the water jet to the size of the target by varying the amount of water while maintaining the same jet speed and thus catching certain insects in a targeted manner.