Meet the Newest Member of Our Sub-Antarctic Penguin Colony

Charlie the adorable Gentoo Penguin Chick is described as ‘sassy with a great appetite!’

It’s the most wonderful time of the year…as SEA LIFE Sydney Aquarium has announced the arrival of an adorable Gentoo Penguin Chick – just in time for Christmas!

Keepers have named the chick Charlie. Charlie is the second chick to Pink Lady (dad) and Winne (mum) and has already shown to be the perfect combination of mum and dad. 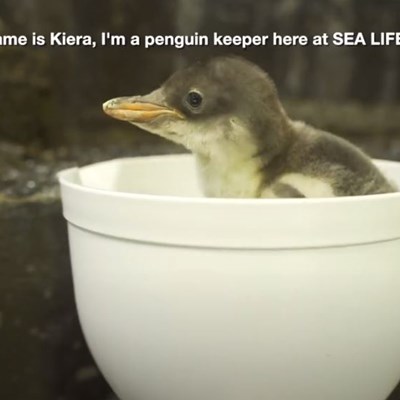 SEA LIFE Sydney Aquarium Penguin Keeper Kiera Ponting said, “Charlie is an adorable addition to the colony – born last month at just 90g, Charlie already weighs 3.5kg and is reporting well above average on the penguin chick growth curves. We think Charlie gets their love of food from dad (Pink Lady), who is one of the bigger penguins in the colony! Charlie is also quite sassy but still very affectionate - just like mum (Winne).

“We can see this as Charlie regularly bows to its parents – which is an adorable sign of affection in penguin language!” added Ponting.

Charlie’s diet consists of a variety of fish, mainly whiting and pilchards. Before feeding time, the keepers check the stomach of the fish to ensure there’s no plastic inside. This is very important as plastic pollution is a major threat to penguins – especially those in the wild as many of the fish on their menu consuming microplastics. Charlie will play an important role as an ambassador for the Gentoo

Penguin species and we hope it will encourage the public to consider ways they can be more environmentally conscious.

This summer, guests to SEA LIFE Sydney Aquarium in Darling Harbour will be likely to spot little Charlie in the Sub-Antarctic Penguin exhibit –Charlie is usually spotted running around after mum and dad and looking for food!